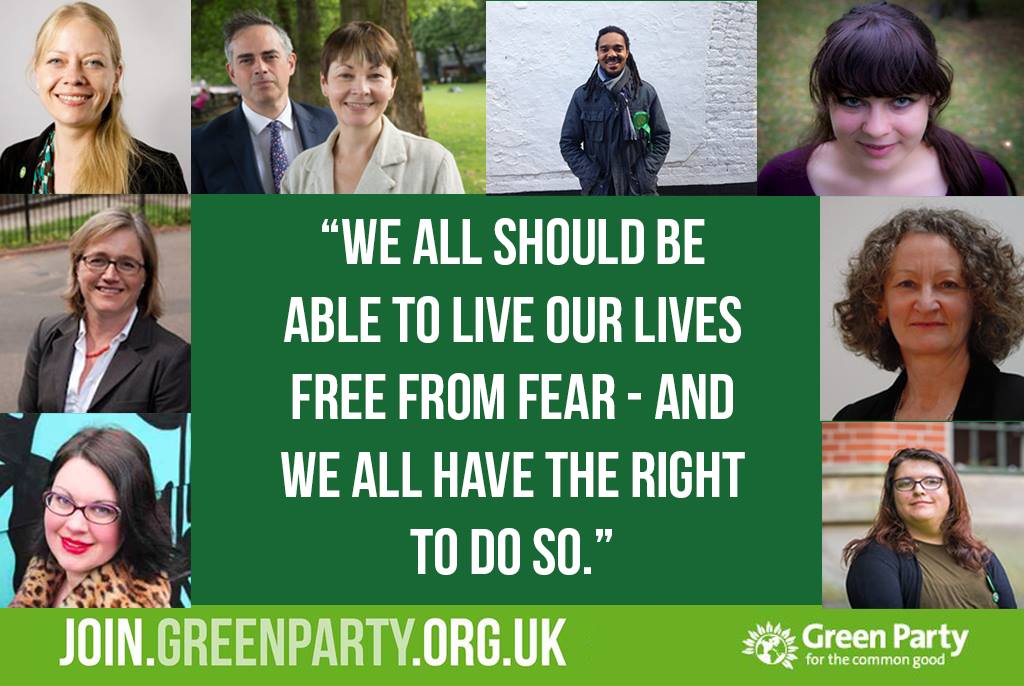 The legitimate interests of all people are of equal value. The Green Party rejects all forms of discrimination whether based on race, colour, sex, religion, national origin, social origin or any other prejudice. We accept the need for social institutions to protect the interests of the powerless against the powerful. [Philosophical Basis of the Green Party, PB303]

The Green Party recognises the contributions made by many migrants to their recipient area or community. We value the cultural diversity and intercultural awareness resulting from both temporary residence and migration. [Policies for a Sustainable Society, MG103]

The Nottingham Green Party is a collection of like-minded individuals from the Nottingham area who aim to enact the policies and principles of the Green Party of England and Wales in their community. We campaign and stand in local elections at every level of government to achieve those aims.

In the wake of the disappointing result of the EU referendum, the Nottingham Green Party is concerned about reports and anecdotal evidence of violence towards and intimidation of migrants and migrant communities, including refugees, asylum seekers, and undocumented migrants, from within and without the European Union. The National Police Chiefs’ Council continues to release figures showing shockingly high increases in recorded incidents.[1]

The spike in hate crime towards these groups mirrors the rise in harassment of other disadvantaged groups, such as LGBT people.[2]

We totally condemn these incidents.

There has been a change in political atmosphere at local and national level. In a time when society needs the government to speak out strongly for the protection of migrant communities and other disadvantaged groups, it is instead choosing to persecute them, and foster this toxic atmosphere of intimidation. This year has already seen the 2016 Immigration Act that levels punitive measures at the most vulnerable migrants. It is not hyperbole to say that some of the policies that are now being considered as mainstream political discourse would be at home in the fascist governments of the early 20th Century, such as the compulsory listing by businesses of employees that are foreign nationals.[3]

In light of these highly disturbing developments, this National Hate Crime Awareness Week, the Nottingham Green Party states unequivocally that it is proud of Nottingham as a diverse, multicultural city, and wants to preserve it as a place where no individual belonging to any underprivileged group should feel unsafe. The Green Party believes that we should focus on tackling the real causes of inequality and injustice in society - the underfunding of public services, lack of new homes, and shrinking of our welfare state.

We would like to offer our support, in forms including skill-sharing or help with campaigns, to any groups that operate within the city that share our aims in this regard.

We also invite you to attend our friendly and open meetings. They are held on the first Tuesday of every month at 7:30pm at the Friends Meeting House on Clarendon Street.

If you'd like to speak at an upcoming meeting about these issues, please email contact@nottingham.greenparty.org.uk.