Vote Remain and keep us in the EU, urge Nottingham Green Party 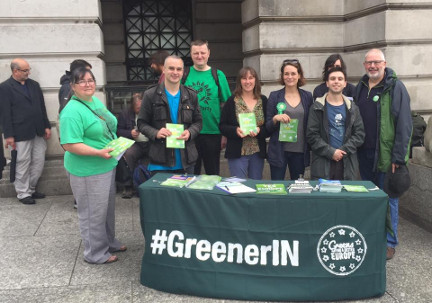 Voters in Nottingham who care about the environment and tackling climate change must vote for the UK to remain in the European Union, says Nottingham Green Party.

Nottingham Greens have been speaking to voters this month about the benefits of EU membership as part of the Greens for a Better Europe campaign1.

"Councils and regional groups are able to gain funding from the EU for regenerating local economies, growing new industries and helping create jobs - funding projects that would never be made available through our over-centralised UK government which forces local councils to grovel to Westminster even for money to fix pot-holes in our roads!

"To leave would be to throw all this away, leaving England in isolation, even within the UK - as Scotland, Wales and Northern Ireland are all likely to vote to Remain. The UK would be left with an even more right wing government ripping up hard won rights that people across the EU have worked hard to achieve, on working hours, on safety at work, on health and pollution, on preserving our shared environment.

"The EU is not perfect, and parts of it certainly need reform. But overall the benefits of membership are clear, so on Thursday 23rd June, please vote to Remain."

The leader of the Green Party of England and Wales, Natalie Bennett, has also been highlighting how the politicians running the Leave campaign have an abysmal record on the subject, including Michael Gove, who attempted to remove climate change from the school curriculum.

"In environmental diplomacy, the EU as a whole is far more effective than member states could be individually in developing and promulgating cooperation, long-term approaches, and motivating others into action.

"The current UK government has taken actions, in particular on renewables policy, that have seen Britain slide disastrously in the league tables for attractiveness to clean energy investors and damaged small businesses and job prospects. But thanks to the collective peer pressure from our European partners, the UK government has indicated that it will aim to improve in areas of home heating and transport, where it so often falls behind.

"When one EU country, for example the UK, moves in the wrong direction, this can be challenged by cooperative action. For example the European Parliament has called for a fracking moratorium and for chemicals legislation that can also act as a check on this government's fracking ambitions.

"On climate diplomacy, the UK benefits from enhanced representation in the United Nations Framework Convention on Climate Change, being both a party as the UK and again as an EU member.

"The Brexit campaign leadership is dominated by climate sceptics, with a terrible track record of attacking renewable energy and undermining climate action. They deny the scientific evidence on climate change, just as they deny the economic and environmental risks of leaving the EU.

"Michael Gove tried to remove climate change from the national curriculum, an indefensible attempt to prevent our young people being informed about the overwhelming scientific consensus on the subject. Meanwhile, Nigel Farage and UKIP want to abolish the Climate Change Act and have expressed total opposition to wind power2."

The Green Party's campaign is also focusing on celebrating the free movement of people in the EU, on our membership's central place in maintaining and enhancing workers' rights, and on the capacity and actions of the EU in reining in the abuses of tax-dodging, low-paying multinational companies.