"No reason to be reassured" by energy minister on fracking

Nottingham Green Party has said that it finds no reason to be reassured by energy minister Matthew Hancock's statement that the Government has guidelines on fracking that would protect Britain's outstanding landscapes and Special Protected Areas. They also ask why these guidelines will not be applied to all other parts of the country, where most people live. Hancock's comments came on the day that the Government has announced a new licensing round for gas and oil exploration that covers large areas of the UK including most of the East Midlands.

Greens point out that people in Nottinghamshire have more to worry about than most about the Government’s support and encouragement of the development of fracking. The shale where fracking might take place lies under most of the county. It is already the case that more than a dozen companies hold 'Petroleum Exploitation and Development Licences' that will allow them to frack once they get planning permission. The energy minister says he wants to speed up the process of giving permissions and see test wells drilled as soon as possible. Greens also point out that the fracking companies have now the right to drill under people's property without notice or compensation. 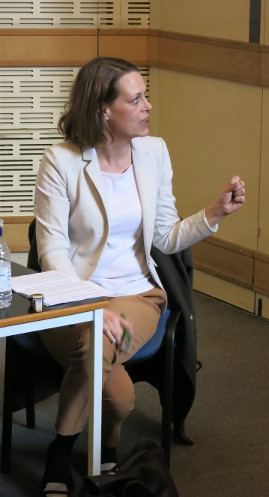 Kat Boettge, the Green Party Lead Candidate in the recent European Elections, says "There are serious concerns about fracking. The experience of America shows that the process does lead to water pollution, requires huge amounts of fresh water and creates waste water that is hard to dispose of. In Blackpool, this waste water was so radioactive that it needed a special licence to transport it away. The Government tries to say that we have strong regulations to control these problems. Yet since 2010 they have been scrapping whole rafts of regulations, including those on hazardous wastes, air pollution, noise and contaminated land, the very problems that fracking creates. They have also cut the funding to the agencies that will have the job of enforcing the rules."

"Fracking is a hopeless diversion from the real need to develop a sustainable low carbon and affordable energy system for this country. At best this is only going to benefit a few investors and shareholders, at worst it will leave us all with a huge mess to clean up at our expense."

The government has issued a “bonfire” of environmental regulations. Among those being downgraded are the rules controlling hazardous waste, air pollution, contaminated land, noise, light.

Matthew Hancock, the Conservative energy minister, said he wanted to speed up the process so companies are able to start drilling within six months of putting in applications.